I learned a valuable lesson since posting the story about Hershey and the rabbit. She can read and she takes what I say literally and she has great control over her potty functions. She needs a little practice with comprehension and interpretation of what she reads though.

Apparently she believed that she really had a rabbit in her tummy and that it was in fact trying to get out. This is the only explanation for what has occurred since the posting of that story. It seems that she had in her mind that if she let it out, she might lose her super powers. Since she apparently takes things very literally and she only has the life experience of a 4 month old, she only had one idea of how the bunny might escape.

Yes, for the biggest part of two days since the posting of her story, Hershey has refused to potty. Being the loving and concerned Alpha that I am to her, we took a little trip to see the vet. We had to go for shots, so I decided he needed to check on her.

I will begin her counseling trust fund soon. Apparently all she needed to get over her fear was a little encouragement from the vet. He assured us that she would get thru this and no bunnies would be hopping out and she would not lose any of her power. As soon as we returned home, she hopped out back and took care of her potty needs.

At least that is the only explanation I can come up with. It beats the one about how she either ate something she shouldn’t have or isn’t getting enough to drink. That would just be awfully boring.

I think I may be finally showing my age. Um, we will call it maturity and wisdom and leave it at that. No comments from the peanut gallery.

Hershey has learned to jump. She is jumping on everything. Grills, beds, couches, lawn furniture…she was thwarted from her attempt to jump on the kitchen table.

My neighbor blames it on a hover tail that she is positive Labradors get at a certain age. I have been hoping for super powers I might be able to harness and sell for an enormous amount of money.

I suspect something much more sinister has occurred. In order to unravel the mystery, I must take you back a few days.

I am not certain which day of the week the transformation began, so I will start with Day 1.

Day 1 – Hershey sees a giant hoppy thing with beady eyes in the back yard. I’ve never seen a dog run so fast in the opposite direction of a rabbit…. She finally mustered up the courage to speak to it from underneath my chair.

Day 2 – Hershey discovered two smaller versions of the ginormous creature with beady eyes she had spotted the day before….I did not allow her to play with the babies and sent them to the other side of the fence.

Day 3 – Big sis, Goldie, was tired of watching Hershey cower in fear and decided to teach her what to do with the beady eyed hoppy creature…Chase it!!…She was chasing them so fast we could not capture a suitable photo!

Day 5 – Goldie and Hershey spend hours guarding the back yard against the monster hoppy things….the beady eyed hoppy things just taunt them and run under the fence. 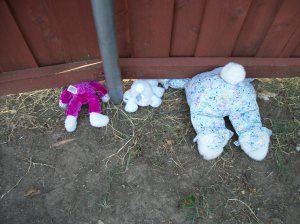 Day 6 – No sign of beady eyed hoppy things. Hershey develops the uncanny ability to jump up on things to get a better view.

So, one of two things has happened. She has either truly gained a super power by being scratched by a beady eyed hoppy thing, in the same way spider-man obtained his powers, or she has been reading books on whales and decided to try the Jonah trick and swallowed one of them which is now trying to get out.

I haven’t seen a rabbit in a few days…

* Pictures are reenactments, no harm was done to an actual bunny or dog in the shooting of these pics.  Photos provided by the blogging assistant Gracie Wade.